No Comments
Back to Mission: Medical Mission 2019 Cuenca, Ecuador

Cleaning staff of the Santa Ines – continually on the job.

Nurses and patient porter, Trish MacPhail, pausing for a photo with a patient.

Doctor’s lounge. A break while awaiting OR availability

Door way to a church

Landmark Cathedral of the Immaculate Conception in Cuenca

Heading into the final two days of surgeries, it is still carnival holiday in Cuenca and the hospital OR’s are largely available for TNMS surgeons except in the case of local emergencies.  Sadly, there was an emergency case in the OR and a young woman, unrelated to the TNMS group of patients, was admitted and died as a result of injuries she sustained from a bad fall.  Although unrelated to the TNMS cases it was a solemn event and impacted many within the team.

Originally scheduled for 10 hip surgeries, the team was able to complete 9 by the end of the day.

TNMS’s 11 year old PAO patient, Maria, developed a chest infection and was treated with antibiotics.  Also, another kind of medicine was offered…Nicole, one of the TNMS OR nurses, had brought a special gift she planned to give to one of the patients this year.  Maria was the recipient of Nicole’s large teddy bear that had been Nicole’s when she was very young. 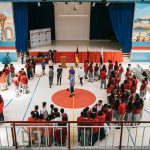